It looks like I still need to post the contents of the third and final blaster from last week, which included a numbered black parallel, but for now I want to post the list of cards I need to facilitate some trading.


From the short prints:

I'd also be interested in any of the Brewer Goudey Memorabilia or Goudey Graphs cards.

If anyone would like to trade for any of the minis I've found, let me know. I also recently found a Rich Harden blue back mini to go with the original mini.
Posted by Sharpe at 8:27 AM 7 comments:

Well, it's definitely a full blown addiction now. What started as a nice little summer side project has definitely become habit.

First it started with a friend of mine saying, just one pack, let's take a look at these cards and see how they look.

So he got a pack, and I got a pack, both from Target and that's when it all started. His first pack was filled with Brewery goodness. A mini-Yovanni Gallardo, Ryan Braun, and JJ Hardy. Heck, I didn't even understand why there are mini cards at that point, and to be honest I'm still not certain I know, but damn, I wanted to one-up him.

So over the course of that week, we each grabbed four packs. I may have pulled one 4-in-1 out of those four packs, but my friend Brian was pulling more, and that's what lead us to the blasters.

At this point we both knew we were going to buy more packs, even though we knew it would be nearly impossible to assemble just the base set of 200 cards (or 220 if you count the short prints), let alone all the 4-in-1 cards, the Heads Up, or the Sports Royalty subsets.

The we started reading the blogs and once we found out every card could be a mini, or that the 4-in-1s came in four different colors (red, blue, green, black), or that certain cards were short printed, we became daunted and were going to pass on this set. But then I said to my friend

"I don't even know why I want these cards, but I'm pretty sure it's because I can't fully comprehend the set. The more confusing this set is, the more I want it. All of it."

I'm still pretty positive there's a parallel to women here, and you don't have to look very hard to find it. But I digress. We find ourselves grabbing a blaster from Target a couple weeks back, since we both knew we'd purchase at least 8 more packs, it was cost effective. Then we started debating the merits of a hobby box, but what's the point when I can get 16 packs from 2 $20 blasters at target instead of spending $80 to get 18 hobby packs. We did the math and settled on 2 blasters.

But what we noticed between the time it took to get our first blaster and the time it took to get our second (and, oh god, the addiction set in, *COUour thridGH*) was that they were drying up all around the Twin Cities. I want to say I had to go to about 9 Targets to actually find a second blaster, and once I found that one I couldn't leave its twin brother behind, so I bought that one too. I figured I'd have to be pretty close to the 1-200 set after three of them.

While I don't have a pack by pack breakdown for you, I can tell you I've assembled 101 of the 200 base cards. I landed Cal Ripken and Johnny Bench Sports Royalty cards. 8 Red 4-in-1 cards, 2 Blue 4-in-1, and 3 heads up cards featuring Ozzie Smith, Grady Sizemore and Tim Linecum. I've actually got a double of Sizemore up for trade.

My prize from blaster #1 was this Bill Hall memorabilia card: 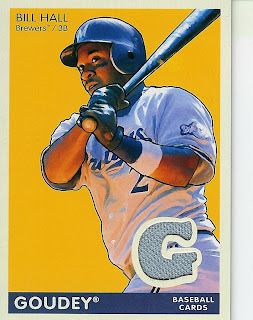 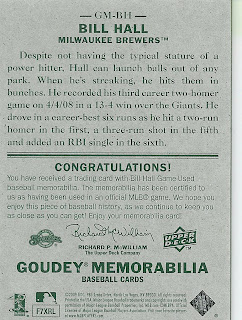 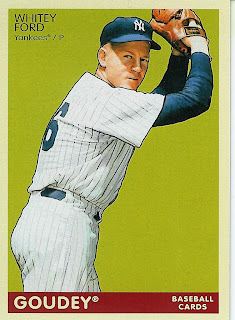 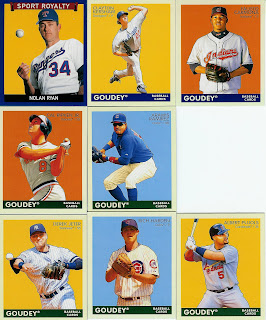 I look forward to opening the last 8 packs over the next week or so. In the meantime I'll post the list of doubles I have for trade outside of the Sizemore Heads Up that I already mentioned.
Posted by Sharpe at 1:47 PM 1 comment:

Looks like I've missed a week or two of documentation, plus I've got a bunch more card posting to do.

Such is life while on vacation.

Pulled off what I deemed a fantastic trade this week. Sent out Mike Gonzalez and Bret Myers for Lance Berkman. With Berkman, a career .300 hitter sitting at .208 on the year, he's prime for a 15-30 stretch with 8 HRs. At least that's what I'm hoping for. We're still rolling three closers out there with Downs (for now), Heath Bell (who pitches once a month), and Francisco Cordero.

Meanwhile, here's to hoping Verlander stays hot and that Liriano can find his dominant self again. I don't think we've started Liriano much this month, which is fine, he's been mostly terrible. Chris Volstad will also have to pull it together. Johnny Cueto has been complaining to us lately about a sore back from carrying this pitching staff all year. Sheesh.

Don't fear Johnny, Jorge De La Rosa is in the fold now, and Old Man Randy Johnson was kicked to the curb. I can't believe I'm counting on De La Rosa to help deliver us to the promise land. That guy was such a wack job when he was in Milwaukee, but maybe he's blossoming late (at 28) like "they" say lefties do. Whoever they is.

And then there's the really bad news for Week 7. Rickie Weeks is going to see a specialist, again, about his wrists, again, but this time his left wrist. Nothing about this makes me happy. No backup 2b, not a decent FA option (screw you Marco Scutaro), and I was about a week away from finally saying "I told you so" to the rest of the league about Rickie finally proving that he's got MVP caliber talent. Oh Rickie, why did you have to do me like that.

My prediction for this week, Ryan Howard, Lance Berkman, and BJ Upton all get hot and start leading our team back up the standings.

Tomorrow my goal is to post about the current Goudey obsession a friend and I are going through. I did pull a memorabilia card from one of those 8 pack blaster boxes, but that's all you get is a teaser right now.
Posted by Sharpe at 10:45 PM No comments:

I was pleasantly surprised to find out my local card shop, Three Stars Sports Cards has a website complete with an online store and blog.

Last night a friend of mine bought a pack of the Goudey 2009 Baseball cards. He's currently trying to sell me on the merits of us each getting a box and trying to put a set together. In all honesty, at first glance that set seems a bit overwhelming to wrap my brain around, but he's slowly making his case to me.

We're already lined up to grab the last 30 cards of Topps Series 1 for this year, as well as breaking a box of Series 2 together to round out the set.
Posted by Sharpe at 8:24 AM No comments:

Well, I finally got around to figuring out exactly which cards I need:


Also to note, a buddy of mine recently broke open a series 1 box and landed a Mat Gamel autographed card. As he put it:

"99% of the world would be pissed that they got a Mat Gamel card, but not me."

Needless to say, I need to acquire one of these myself, or any of the other Brewer relic/auto cards. So if someone has one to trade, I'd be interested.
Posted by Sharpe at 12:48 PM 1 comment:

Wow, what a momentous week week 4 was for the Golden Valley 55ers in the Hampshire Baseball league!

We finished week 4 as the third best team for that week, and while we didn't move out of 12th place (last) we made substantial gains. It's really tough to name a Week 4 MVP, but I think I'll name Justin Verlander and Johnny Cueto co-MVPs.

Over to the offensive side of the ball, where Rickie Weeks had the best week by far, although that's not saying much. Rickie put up 7 RBI while batting .285 and stole a base. Not too shabby. Troy Tulowitzki rebounded from his benching late last week to hit .333.

Notable disappointments were Kevin Kouzmanoff who went ice cold after being red-hot, Chris Davis (again), BJ Upton (again), and to some extent Carlos Beltran who didn't drive in a run or hit for much power at all last week. He did finally manage to steal a base - I could go for more of that.

I put some feelers out there to see if anyone was willing to swap a big bat for a pitcher, but thus far there haven't been many interested parties. Interest is high in Verlander, and Liriano to a lesser extent) after both began to bounceback. Dan Uggla was available in trade, but at this point I'm content riding out Weeks' aparent breakout season.

Major decisions this week were not to pursue a trade of Matt Holliday (too rich), and to continue starting BJ Upton. If he doesn't hit this week, it may be time to wonder if he's still hurt and start someone else. We can't have someone hit .177 in our lineup all season. Hopefully we get Vlad back soon too, because we're starting Delmon Young at DH. This wouldn't be a problem is the Twins wouldn't have traded their franchise pitcher (Santana) last year for a toolsy outfielder who can't hit (Gomez), but as it stands, Young misses at least a games worth of ABs each week, plus hits 6th or 7th. We can't withstand that for a long stretch of time either.

I did take a flier on Eric Patterson this week. I'm hoping he can show the same talent he shows at AAA every year while up in Oakland again. If he does, I'll try to flip him with a pitcher for another stick. Here's to hoping I catch lightening in a bottle!
Posted by Sharpe at 1:18 PM No comments: