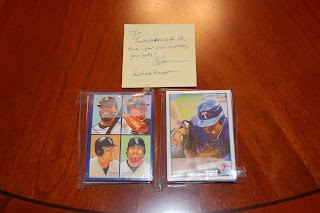 Golden Valley, Minn - Trade rumors have swirled around these two storied franchises for weeks and today we're getting our first look at how this deal shook out.

Skipper Chris over at Nachos Grande agreed to send a pile (READ: 50) of my 2009 Topps Series 2 needs and some Goudey 4-in-1s in exchange for a pile of A&G Minis, some 2009 Heritage High Number SPs, and whatever else I can find.

Nachos Grande was reached for comment on this stunning trade:

"Well, I had these Series 2 Topps laying around, and I'll be damned if Sharpe didn't have a need for them. The next thing you know I'm pocketing some precious high number SPs and a sack full of minis. I couldn't be happier. Sure beats using the 'bay. I can only hope these cards actually arrive. This Sharpe character is a bit of an enigma, plus I think he's shorting me a card, we'll see if this bounty ever shows up."

In lieu of having those cards to look at, I present to this beautiful booty of sock-jackers, gold-cuppers, new Brewers, and sweet sweet scoreboard action: 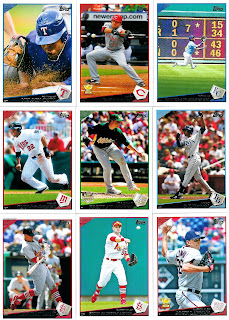 I threw in Nelson Cruz because I think that might be my new favorite card, which would surpass the crazy Nick Swisher card from earlier in Series 2 Topps. And Brett Anderson, well I'm just going for karma posting him. He's supposed to carry the back end of my fantasy baseball rotation this year. Behind the likes of Jake Peavy, Justin Verlander, Mark Buehrle, and Jon Sanchez. Please Brett, don't endure the classic sophomore slump. I implore you! IMPLORE YOU!
Posted by Sharpe at 5:02 PM No comments:

Deal Finalized With The Troll 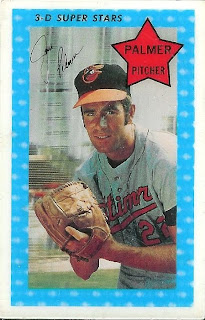 Let me start with some words of wisdom: Never try to finalize trades when you're over tired after being on the road for a week.

I say this because right now I'm praying to baby Jesus that the Troll gets the cards I told him I was sending.

Speaking of Baby Jesus, Troll sent me one of his cards for my collection. 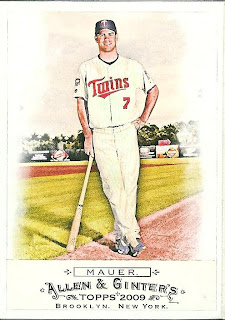 Which is good, because I jettisoned most (all?) of my A&G cards this year. Speaking of, anyone who speaks up can get a pile of about 100 minis. I need to move them out, all in one fell swoop. No time to work out individual trades. So if someone out there wants a nice stack, just say the word, shoot me an email, leave me a comment, and send me your address. They're yours.

Wow, that sure was a digression if I ever saw one. How about that first card, you know the one that you saw when you first landed here. That's some sort of 1970s (1972?) 3D card of Jim Palmer. This predates my original SportFlix cards from the 80s or 90s or something like that. Anyhow, what I love about this Palmer card is that I'd never known it existed if not for the fact that it arrived in my mailbox. To the Troll I offer my sincere thanks.

Both of the cards shown above were some nice throw-in to our original deal. Originally I was asking about the Topps Legends of the Game inserts, and he came through with some of these for me as well.

I just realized this week that I have no idea how many of these cards exist, why the numbering is different on some (LLG vs. LG-something), or why some are different colors. As always, please feel free to enlighten me. But first, to close, 2 more of these wonderful cards. 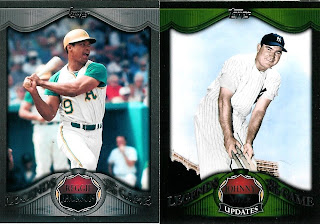 PS - Thanks for also knocking off a nice chunk of my 2009 Topps U&H and Series 2 needs which can be found over in the sidebar.
Posted by Sharpe at 12:44 PM 4 comments:

Email ThisBlogThis!Share to TwitterShare to FacebookShare to Pinterest
Labels: 2009 Topps Legends of the Game, Completed Trades

Back In The Fold 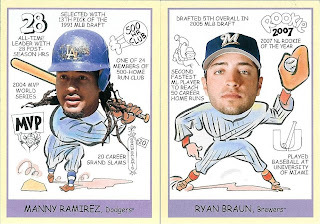 Ryan Braun comes across as cocky, but since he's on my team I don't care.

I just love Brauny, I really do. I hope he and Prince settle down in Milwaukee for a Yount and Molitor-esque stretch. That would make my decade.

I picked up Braun's Goudey Heads Up card off eBay along with ManRam. The lot cost me $0.99 total. I dig these cards. I think it's the sketches and the random information on the front of the card like I like so much. On some of the older cards you get these cartoons and such on the back of the card, but never really on the front. This gives each card a nice whimsical feel that I can really get behind.

A side note on the "Drafted 5th overall" note. At the time I remember being upset that we didn't take Troy Tulowitzki. I think I'm over it now. All I can say is that I'm glad we steered clear of the pitching in that first round. Wade Townsend, Mike Pelfrey, Lance Broadway. Eek. Garza and Volstad may be the only decent arms out of that first round. There is however still a bit of unfulfilled talent from the top of that draft class. Justin Upton, Ryan Zimmerman, and Troy Tulowitzki have all emerged but Alex Gordon hasn't gotten on track yet (I'm betting on him this year), and Jeff Clement hasn't done what he was supposed to do yet. Maybin, McCutchen, and Jay Bruce were high schoolers at the time and are still making their way toward being solid MLB players.

For the record, Manny's card is cool just because it features all that pine tar.

I'm glad to add these to the collection and I'm still looking for about half the cards from the 2009 Goudey SP set. If you've got any Heads Up or Sports Royalty for trade, just let me know - my goal is to get a trade bait post up this week.

Stay tuned, I've also got some trade packages to post.
Posted by Sharpe at 12:15 PM 2 comments: