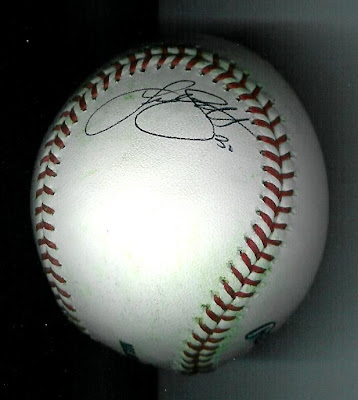 I had quite the man-crush on Luke Scott going into the year, for fantasy baseball purposes. Even though he's a streaky hitter, I love his power, and I thought he'd slot nicely into the middle of that Baltimore lineup giving him plenty of RBI opps.

Because of this, my buddy Brian got me a Luke Scott autographed ball while he was down visiting Rays and Twins spring training, oh, you know, 5 months ago. Better late than never I always say.

So that's what you've got going on the the picture up there. Luke Scott.

Speaking of Luke Scott, he, along with about 12 other guys have been leading a charge for my fantasy baseball team of late. We've surged back up to 4th place after being as low as 10th two weeks ago, and as high as 1st 8 weeks ago. What an up and down season it's been.

Sadly for Luke, he's been way too hot to keep rolling with, and Aubrey Huff has been way to cold to not gamble on.

It was a tough call at DH between Jeter and Tulo, but Rollins provides more SBs than Jeter, and Tulo will provide more RBIs than both. Plus I just played Tulo through a .150 stretch last week and I'd like to make some of that up if he gets hot.

As for pitching, we've been rolling out as many 2 start guys off the waiver wire as possible to try to catch up in Wins. We're middle of the pack in WHIP and low in ERA, so we might as well try to gain 7 points in Wins. Last week we went 5 for 12 in Wins. Not terrible.

This week we're going 3 starters and 4 closers: Verlander, Dickey (FA pickup), Rzepcynski (FA pickup, I love this kid for next year), and Bell/Marmol/Wagner/Kuo for the saves. Should be an interesting week. Only 5 starts, but plenty of nice save opps.

As for the card collecting front. I sent some minis off to JD's Wild Cardz today since he's diggint that sort of thing of late.

Anyone else out there doing some notable trading? I'd love to get back into the game.
Posted by Sharpe at 10:18 AM No comments: 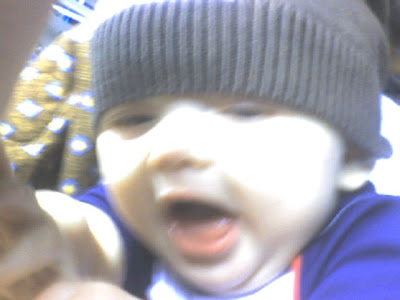 I received some good advice this afternoon to pick up, and move on. Get back to posting, and such.

So, pictured above is the little guy, Theodore. That's his reaction to Thome's walk-off home run against the hated White Sox on Tuesday night here at Target Field.

That was his second game, and first walk-off homerun. I was excited for him. I guess when you're not even as old as the current baseball season you have those kind of moments still :)

1) I'm trying like the Dickens to finish off the 2009 Goudey set. I've finished off the first 20 SPs (retired greats) and even have an extra #216, Robin Yount, to trade for anyone who can knock some stuff off my Sports Royalty and Heads-Up list.

2) Got any mini '09 Goudeys laying around that you have no need for? I'm interested. I think I'll build the mini set as well. What can I say, my first set collected since my childhood has a strangle-hold on my heart.

3) I'm also trying to finish off the 2009 Topps Series 2, and U&H. If you can help out, let me know what you are looking for in trades and we can try to work something out.

4) My fantasy baseball team has been flirting with 4th place of late. I'll dive into that next Monday.

Lastly, I'm trying to work out a contest idea to give-away the box of A&G I broke this year. I think I had 2 or 3 autos. 2 for sure. 1 solid one. I just want to put all these cards out of my house and into the hands of a collector that will appreciate them. I won't lie, the one relic I got was of some wrestler, so you'll be stuck with that too.

Alright, I'm off for now, but I'll be back soon. To anyone out there still reading.
Posted by Sharpe at 2:27 PM 2 comments: