HBL Week 5: Hey Carl Crawford, Hit Or Get Off The Pot! 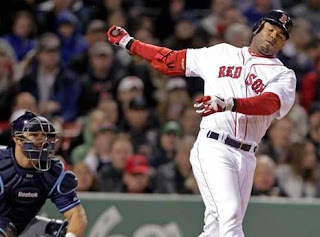 And we're back for yet another year of blogging my fantasy baseball team.  Because, quite honestly, I found great pleasure in re-reading some of the craziness I posted in relation to the 2010 season.

I signed Benji Molina  year ago today.  Really?  Really?  Things are so much better this year (kind of).

Here's the deal.  My fantasy team is rolling with Russell Martin at catcher while Carlos Santana works the kinks out.  I was able to pick up Martin in exchange for Ian Kennedy a couple weeks ago.  I liked Ian a lot, but quite frankly I was never going to trust him enough to play him this year.

I went the value pitching route this year, rather than throwing all my money into say CC Sabathia or Dan Haren.  Although, at this point, those would have been great moves.  I'm suffering from Win-itis on my team right now.

You see, on a weekly basis, I trot out some combination of 4 or 5 starters from a group of Brett Anderson, Josh Beckett, Derek Lowe, and Ricky Nolasco.  I've been smart enough not to pitch John Lackey up until this point, although I did make the mistake of running Narveson out there this week for 2 starts.  But anyway, as I was saying, these cats aren't winning any games, and while I've been rolling out three closers in Papelbon, Marmol, and Bell that also means that I'm dead last in Ks.

ERA and WHIP are great, which is the reverse of a year ago.  It took every fantastic 2 start option I could find last year to pile up enough Ks and every safe SP start to bring down my ERA and WHIP from the mountains they began the year on in 2010.

Although in 2011 I face a similar problem to what I like to call the Lance Berkman fiasco from last season.

CARL CRAWFORD.  WOULD YOU PLEASE HIT THE BASEBALL AND STEAL SOME BASES?  YOU ARE DRIVING ME INSANE.

I can handle Aubrey Huff not hitting.  That happens.  Frequently.  But Carl Crawford was supposed to walk on water in Boston with PEDroida, Gonzalez, Big Youk, Ellsbury, etc.  Now he hits 8th behind Jed "Career Year" Lowrie and right infront of Jarrod "Way Too Much" Saltalamacchia.

I'm benching Carl Crawford next week, and I'm sick about it.

Week 5 should also mark the return of Evan Longoria.  Finally.  A month without Longo.  Thank God I have Jose Bautista as well.  Chipper Jones and Scott Rolen were both trotted out for a couple of weeks, but they can't seem to stay in the lineup much of the time and Rolen hit the DL already.

The only people I can applaud on this team up to this point are Rickie Weeks and Troy Tulowitzki.  Thank you guys.  Thank you for doing your jobs.  Now let's go out there this week and start the march toward back to back titles.
Posted by Sharpe at 9:41 AM