Ryan Braun is the NL MVP 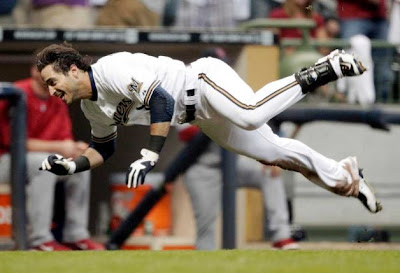 With apologies to Matt Kemp, who is having a great year for a terrible team, I hereby proclaim Ryan Braun NL MVP.

There are a bunch of players in consideration, the Phillies aces, Justin Upton, Albert Pujols, etc, etc . . . but in the end the clear choice is Ryan Braun and I'm not just being a homer about it.

Braun currently leads Kemp in AVG, OBP, SLG, and OPS. Sure, he trails him by a few homers and stolen bases, and sure, Kemp may end up a 40/40 guy, but I don't care.

Maybe the steroid era ruined me. 40 homers just doesn't sound like that many anymore. Maybe if Matt Kemp was going to hit 58 homers and steal 40 bases I'd give him a second look despite his  team's lackluster performance, but he's not going to do that.

Maybe if Matt Kemp was going to steal 80 bases, something really amazing, I could get on board. But what if Matt Kemp is just taking off for second base after every single chasing the 40/40 club thing? I mean, I would. My team is going nowhere, who cares if I'm thrown out. MVP! MVP! Run Matt, run!

Sorry, I'm coming off as a Kemp hater, and I'm not. He's a terrific player and would be even more deserving of the two man fight for the MVP if the Dodgers were headed to the postseason, but they aren't - so he isn't.

Ryan Braun should finish up with around 35 HRs and nearly 40 steals as well. As I said with Kemp, neither total is mind boggling, but in a two man race, the tie goes to Braun.
Posted by Sharpe at 10:03 AM