Nick Swisher, You're My Hero 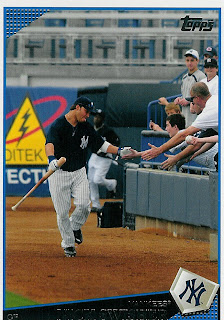 This is a well overdue blaster-break post that I've had queued up since, oh I don't know, June.

Look at this card. I mean, REALLY look at it. I'm sure your eye is first drawn to the halo encircled yellow triangle of lightening. Right? But then you make your way over to Nick Swisher. And he's doing what? Slapping 'five' with all his adoring fans? What is taking such a high level of concentration that he needs to have his tongue protruding from his mouth? This is easily my favorite card I've seen in the Topps set this year. Right down to the guy wearing a Bears hat at Yankee Stadium (I've since been corrected that this was not in fact Yankee Stadium, but instead Legends Field - my next comment still stands however!). You know, I've never been there, but I sure as heck wouldn't be caught dead wearing a football hat to Yankee Stadium. Couldn't his buddies have chipped in to get him a Yankees cap or something from the pro shop?

Okay, while I could spend an entire post reflecting on this card, I won't.

Let me get this off my chest though. I was totally duped when buying this blaster. The Series 2 blasters come with some sort of commemorative patch. But the 8 packs were only 8 cards per pack, and one of those was a Topps Town card.

Now, I admit I didn't see it was 8 card packs inside the blaster, but I had no reason to suspect that was the case. So if you think about it, I got what is basically $10 worth of Series 2 cards (17 cents times 64 cards) plus a patch for $20. I paid $10 for a lame patch card. Are you kidding me Topps? I had buyers remorse after I cracked open the first pack.

Now if I had landed a Jim Palmer, Robin Yount, or Paul Molitor patch I'd have been fine. But I didn't, so I'll complain. Here are the other cards I liked from the blaster:


Pujols Legends of the Game 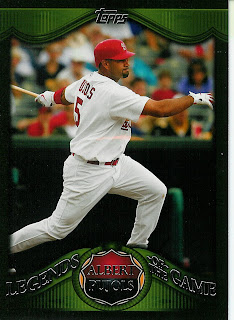 Maddux Legends of the Game in the sweet throwback unis 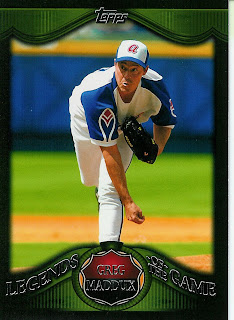 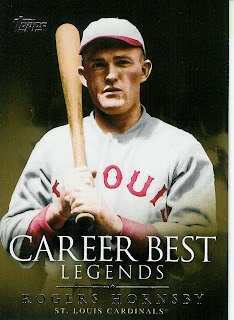 Jimmy Rollins Turkey Red. To note, I'm not collecting these inserts, and this one along with my series 1 TRs are up for trade. 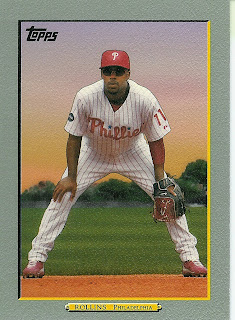 Who started the whole "OH MY GOD THEY MIGHT BE READING MY LIPS" trend? I find it to be, by far, the most annoying 'I do it because everyone else does' trend in all of baseball. 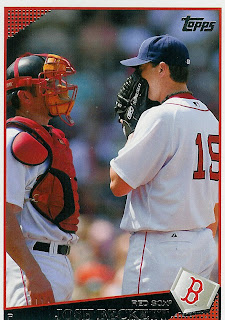 Lookin' good forty-nine! Lookin' good! I may need to start a Yo! (c)(tm)(r) collection soon. 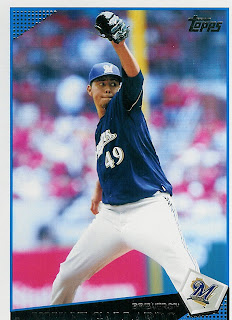 One more OSM card for the road. Jered Weaver. The hair, the look on his face, the "pose". Everything about this card challenges Swisher's card for the top spot in the 2009 Series 2 checklist. If you can beat either of these, let me know. 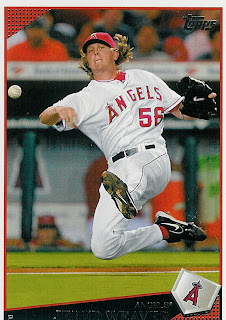