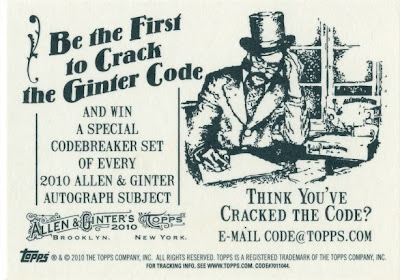 I'll be honest, my fantasy baseball team and my card collecting has me depressed of late. I can't seem to get anything scanned (lack of time, not motivation) and my baseball team keeps getting more and more decimated by injuries.

Quick rundown shows I tried to do something about it though. Traded Uggla and Thornton for Rollins and Wagner this week - which looks lopsided but I can't keep either player next year and the other guy can keep both . . . details.

VMart (if he plays, really don't want to call up wonder boy Carlos Santana), Berkman (wait? I thought you stopped playing him???), Weeks (he'll be hurt in 20 minutes), Jeter & Longoria (these guys did NOT hit in June), Byrd (jebus, really?), Crawford (will he log more than 7 ABs this week? hope so!), Magglio, and newly acquired Jimmy Rollins. What will I do with 3 shortstops in August when Tulo comes back? No idea.

Back to what's important, the Ginter Code. Last year's co-champ, Nick Jacoby, already has a headstart on this years code. Thanks Nick for letting me steal that Code advert from your site!

From what I've been able to assess based on early ebay listings (no code cards), the wrapper Nick posted on his site (no code parallels listed), and from my gut feeling based on how quickly it was solved last year by Mike and Nick, I have a feeling that the code itself won't be as obvious this year. Meaning, you probably need to actually investigate each card or maybe some of the subsets/short prints to "see what you can see".

Although, for now, until cases, boxes, and packs show up, only Nick Jacoby (and any other early busters) know for sure.
Posted by Sharpe at 12:42 PM