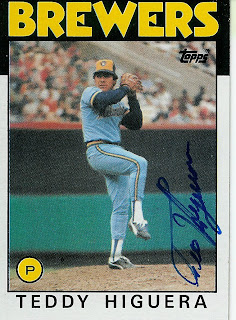 I wish that I could report that I pulled off a trade with The Collective Troll, but the truth is I just received this card in exchange for nothing.

Or I guess you could look at it as a PTBNL type of deal, but as it stands, I'm forever grateful for the generosity that took place. I've failed to pull an autograph from a box break so this is the next best thing.

1987 had a magical start with the 13 game winning streak, Nieves' no-hitter, and Teddy Higuera would follow up his 20 win 1986 season with 18 more. Little did I know that I'd really only have one more season to follow Higuera before arm troubles set in, but to this day I still call him "My Favorite Brewer". And that's a big statement when you grew up with the hordes of Yount and Molitor fans.

Anyhow, I'm forever greatful to the Troll for sending along an autographed 1986 Topps Higuera card. I've always been partial to this card design since it was the first year that I really had any substantial amount of cards (likely only a couple hundred) from any one set.
Posted by Sharpe at 8:08 AM