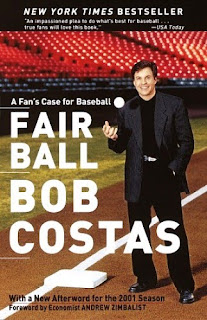 The post season always gets me thinking about this book. I can't help it, the inequity of baseball still really has the potential to make me angry if I think about it long enough.

Since I was thinking about it, and getting angry all over again, I decided to break out this book again before bed last night. You can finish it in one sitting, its a quick read, maybe an hour. Costas outlines what was happening in the game around the time of the strike in 1994, what happened, what went wrong (in his mind) and how it could have been fixed or better handled.

The first thing that jumped out at me was all the references to the struggling Twins and contraction. I'd almost forgotten about it, and I live here. The second thing that stuck out to me was this:

Baseball doesn't have a revenue problem, and didn't in 1994 when the strike happened. This is where I'd like to focus my conversation (ramblings?) as well.

Baseball still doesn't have a revenue problem, but it does have a problem with inequities. Sure Costas' point about needing a top 10 payroll to make the postseason seems a little off these days, but the sentiment at the heart of the comment still rings true.

Yes since this book was written and published (ca. 2000), the As, Twins, Giants, Marlins, Astros, Padres, White Sox, Tigers, Diamondbacks, Indians, Rockies, Phillies, Rays and Brewers have gotten a taste of the postseason without a top 10 payroll. This is true, complete fact, but it still doesn't address the problem.

Why should over half the teams in the league enter each season with no shot at the playoffs, every year, for long periods of time, not just a couple seasons, we're talking 5, 6, 13 years. This just isn't right.

It takes all 30 teams to make Major League Baseball the booming industry that it is, and with this I cannot agree more with Costas. If it takes two teams to play a game, why does the home team keep all the gate money (save for a few pennies)? If the Angels need the As, Rangers, and Mariners to show up for games in order to televise something on TV, why is that revenue not split more evenly? This is the part of the game that simply put, stinks. It's not a part of the tradition, and it's not quaint. It's neither the way its always been nor the way it should be.

In the end, if it takes two to tango, the revenue should be split. Costas notes that the NFL takes a 60/40 split on revenue (home/away) and that's exactly how it should be. All teams should benefit from being in the league, not just the ones in the biggest market or with the most fans. Each team should know that if it manages those resources correctly, they should have a shot.

It's a vicious circle these days. Players either want to play for a contender, or want to get paid. More likely the latter than the former. In the end, they're saying the same thing. The best teams, over a period of time, are the ones operating with the most cash. Sure the Twins, or the As or the Rockies can get by for a period of time, but the only way to enjoy sustained success is to ship off their best players before they become too expensive. If they're going to end up on the Mets, Angels, Yankees, Red Sox, or Tigers you might as well get something for them, right? Right. I won't even go down the road about how terrible this is for fans, but I will say that how sad it is that I already turned on Prince Fielder as a fan years ago becasue I knew it wasn't going to be worth my time to get emotional invested in him. He'll go play in the AL East soon enough. I can only hope the Brewers can ship him out for some pitching before he does.

Now I don't really blame the players, they should try to get the biggest chunk of cash that they can, that's business and that's fair. Especially if they're going to be stuck on a lousey team for years at a time with no hope for winning. What's not fair is the competitive disadvantage most teams are at. And this is where I agree with Costas.

The current economic model is outdated and silly. Teams shouldn't have to decided between being competitive and signing their big name players that have been with the franchise for a number of years. And players shouldn't have to decide between taking less money to stay someplace they've called home for 6 or 7 years and having a shot at a title. It's not fair to anyone.

It's time to institute a salary floor, and a salary cap and move toward progresss where every team gets a chance to think "Hey, this year might be our year". Every team, every owner, every player, and every fan deserves this.

All of the other stuff: realignment, interleague play, the DH, steriods, whatever you think your gripe is with the game, nothing is as big of a smear on the game as the current economics that dictate the most likely outcome of your team's season.

I only hope someone in the game has the stones to stand up and say "enough is enough, let's fix this".
Posted by Sharpe at 10:28 AM

Email ThisBlogThis!Share to TwitterShare to FacebookShare to Pinterest
Labels: Why Baseball Still Stinks