I've been thinking about what I'd title this post if I ever got around to writing it, and I think 'social card collecting ft. the treasure hunt' sums it up nicely for me.

Wading around through the blogs for the past few months has produced many a post regarding the state of our collective minds regarding our collections, the way we spend our money, and the satisfaction we derive from our collections.

In my wanderings over the past month or so, I've been leaving comments here and there on other people's blogs regarding 'what I plan to do' or 'how I plan to collect' from here on out. I'm really only 7 months back into this and I've learned a lot about the various sets and what each manufacturer has to offer.

The real inspiration or idea for this post came from a now defunct blog entitled Topps Baseball Cards. Specifically, the post The Current State of My Hobby. This isn't the first, nor will it be the last time these sentiments have been published. It did however, get me thinking.

Where do I, where do you, or where does anyone derive their pleasure from in hobby?

1. I like building sets. Why do I like building sets? Good question, I tried to answer it in a rational way, but I couldn't. There's just something about a giant stack of cards with numbers on them that makes me want to put them in order and find the other cards I don't have. 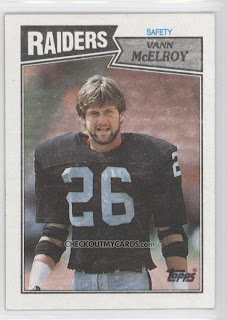 This was the last card I needed for my 1987 Topps Football card set. Yes, I still remember it, and chances are I'm not the only one with a story like this. I bought tons of packs of football cards, yet Vann escaped me all winter. Finally, my friend down the hill from me back home told me he had this card. He was a Bears fan, and I was a Packers fan and this created an natural rivalry. This card and the fact that he had it, and I did not created an entirely different rivalry. I have no idea what he held me hostage for. Probably a bunch of the 1986 or 1987 Topps Bears cards, but I know one thing - once I got Vann in my hands I was happy.

Before I even went out to grab this image I knew Vann was #26. I knew he had a beard and I knew he was wearing crazy elbow pads. And I know for a fact I haven't seen this card in a decade or better. I can remember what this card looked like the moment I had it in my hands and as I sit here right now I can feel all the same feelings I had back then. What a rush.

2. So that brings me to the second reason I collect. I like the social aspect of card collecting. I like trading cards. It used to be sitting down in a circle at a friend's house with a pile of cards to trade. Now it's meeting new people that share the same interest in baseball (or football, or whatever sport your cards depict). Exchanging emails, packages, cards, and thoughts. This is also what it's all about - for me.

3. I love the treasure hunt aspect of card collecting. And I realized the other day that even though I say I'd rather just purchase the cards I want on eBay rather than opening millions of packs to find it - that I'll likely never do it. Or, at the very least, I'll never stop opening packs. There's just a rush in finding something in YOUR pack, YOUR box, YOUR case (you people are insane, but I secretly harbor the desire to break a case of A&G next summer) of cards.

Take for instance, Exhibit B: 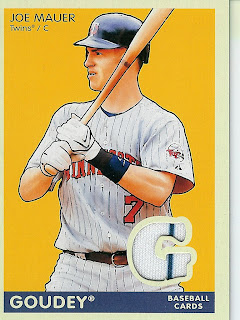 This is the Joe Mauer relic card I found in a blaster of Goudey a month or so ago. Do I chase relic cards? Nope, I actually think, overall, that they are a bit silly. However, I do really like Joe Mauer, and the fact that I opened a pack with a Joe Mauer card that is in theory difficult to find, well I couldn't be happier - even though it's the same image on his normal card from this set.

So, even though I know, fiscally it would make more sense to purchase a collated Goudey set off of eBay for $10, and then spend maybe $60 to get every autograph card I want - I'll still buy packs or boxes or blasters. I know that I derive pleasure for collating the set myself, plus I know that I'll need doubles to trade with other collectors. Or at the very least I'll need cards that other need or want, and if I just get a set for myself, I won't have much to trade.

So what's your story? What makes you operate you do in the card collecting arena? What could get you to change?
Posted by Sharpe at 9:26 AM

Email ThisBlogThis!Share to TwitterShare to FacebookShare to Pinterest
Labels: Well thought out rants