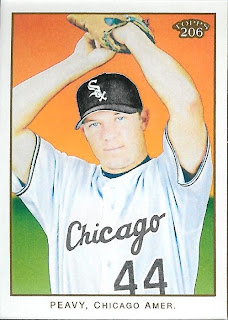 There are quite a few very cool cards in this set. Take for instance this Jake Peavy card, or the Ryan Braun card in the post directly below. Heck even that mini-Markakis card below. I very much like the cards that have the background broken up by two different colors or an image.

However this is offset, for me, by a variety of nits. Yes, the fake stains are terrible, we know this, but what else? I hate the rookie card logo, for any card, ever, but what I hate more about the T206 is that they replace the team name with "Rookie". Why? I can't find any reason for this especially since every rookie card is emblazoned with that terrible logo.

Next on my list of gripes are the packs. Sure, some of you will just say "don't buy packs". I hear you, but I'm weak. I did take a stand against these cards though.

1 pack = 4 base cards, 1 bronze parallel, and 1 mini. Does anyone collect parallels at all? Anyone? Seriously, a fat bronze parallel. You are guaranteed one card in every pack that you absolutely don't need or want. Topps, it's like you're stealing from me. On top of that, you throw a mini, in every pack. Every single pack. To collect this set would be an exercise in learning to be schizophrenic for me. There's just no value here in the packs. I absolutely detest sets that take one card out of every pack and designate it as possibly worthless. Be it mini or parallel, just randomly seed these things. Please.

I feel like I spent part of December preaching this next thought on the comments of many of the other blogs out there, and I just want to go on record for saying this here.

If you take the concept of Goudey, with a small base set, randomly seeded short prints that don't seem borderline impossible to pull, and use the player pictures from T206 or Allen & Ginter, and sprinkle in some of the well done backgrounds from T206 or possibly even Goodwin Champions, top off with on-card autos that aren't easy to pack search for and I think you've got a heck of a set to collect.
Posted by Sharpe at 9:57 AM