HBL Week 5: Hey Lance Berkman, Hit Or Get Off The Pot! 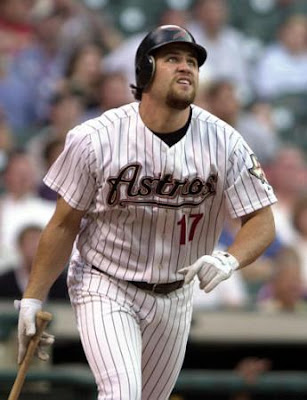 Yes, that title will do nicely. It sums up my feelings leading into fantasy baseball Week 5.

Here's what has happened since we last checked in.

I promoted Jeff Niemann a week too late, Brett Anderson was promoted and promptly got injured, and I started stock piling draft picks for our upcoming minor league draft.

Week four was a banner period for the team. There are only two things I was upset about. Rickie Weeks and Dan Uggla have gone cold at the same time, and Lance Berkman still hasn't hit. Sure there are a variety of things I could complain about like my ERA being over 5 to start the period and my WHIP going over 1.50, but these things have started to work themselves out. Verlander had a nice game yesterday, and overall the pitching staff lead by Verlander, Peavy, Ian Kennedy, Jeff Niemann, Carlos Marmol, and Heath Bell can't possibly be this bad all year.

One thing I really love is that no matter how many guys Marmol puts on base, and no matter how many games the Cubs win by more than 4 runs (READ: All of them), he strikes out all three batters he faces like clockwork. Half the reason for acquiring Marmol and his saves was the K appeal.

But I digress, the pitching should be fine. If I can't have faith in Peavy and Verlander, I built my team completely wrong to start with and there's nothing I can do.

What I can be upset with is this turd of a month Lance Berkman has had. Are you healthy Lance? If not, go sit, I'll find someone else to fill in like I did with Huff for a couple weeks. I'm sick of playing you and seeing no power, no hits, just a bunch of sac flies and RBI ground outs. That's just turds. A word that is starting to become deeply synonymous with Lance Berkman. So that's it, Lance, hit.

Other moves I made were claiming Bengie Molina off waivers, putting in a bid on Wilson Ramos while he's filling in for Joe Mauer, and grabbing Marlon Byrd. I don't really think Byrd is all that great, but I'm playing defense here. Every other hitter I don't think is that great is currently on another roster continuing to put up solid numbers for the competition (I'm looking at you Callaspo, Alex Gonzalez, Kelly Johnson, Jose Guillen, Garret Jones, Polanco, Headley, and Ian Desmond). So this is pure defense. If I could tuck away Andruw Jones I would. But his batting average tells me no one is this 12 team league will touch him.

So that's the scoop, not much to report. We finished in 1st place for the period and are currently in 7th place overall. WHIP, Wins, and ERA are the only things holding us back right now, and hopefully that ship will right itself this week. If only I could find a way not to have to play Mark Beuhrle. I'm crossing my fingers and praying that the Toronto Wells don't light him up later this week. Until next week . . .
Posted by Sharpe at 12:32 PM