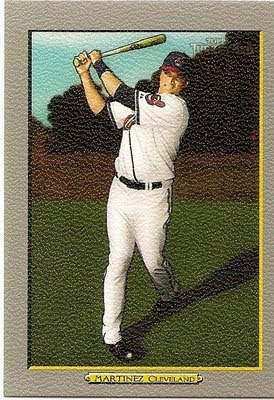 Victor Martinez was my big fantasy baseball acquisition this past week, as seen here in his 2006 Topps Turkey Red card.

I felt I needed to make a move to put another above average bat in my lineup and Victor Martinez was in the unenviable position of playing for one of the last place teams in our league along with having a contract that is doubling (basically expiring) at the end of the year.

I won't say VMart came cheap, because he didn't. I laid out Jay Bruce and Tyler Flowers to land VMart and Ben Sheets. I was hoping to grab Sheets and let him sit on my bench for a while to see if he built arm strength and became useful even for a small stretch of the season. He did have a nice outing this weekend against the Giants.

My lineup now feels much better, but I could use another bat. Why? Because Lance Berkman is turds. There, I said it, pure turds. But I have been calling the Astros the worst team in baseball since very early April. They are horrid. Even Astros coverboy, Roy Oswalt, wants out. It's that bad. Berkman isn't hitting, Carlos Lee isn't hitting. No one is hitting.

So Lance is problem number one. Problem number two is icy cold Marlon Byrd. I still think based on park factors and his lineup slot that he'll be fine at the end of the year, but I would like a hot hand to swap in for him this week. Sadly, I didn't act fast enough and I'm adding JD Drew today. He won't officially suit up for us until next week and Byrd might be out of his 2x32 slump by then. Or he could be up to 3x56 and lose his job, who knows. All I know is I no longer have Jay Bruce to swap in. I'm really okay with this. I couldn't count on Bruce every week and he has a contract that wasn't totally desirable either (long term).

Martinez, Berkman and Byrd are joined by the other stalwarts: Dan "Red Hot" Uggla, Jeter, Tulowitzki, Longoria, Crawford and Magglio Ordonez. I love my lineup, just wish I had a 1b. I'm pondering playing Gaby Sanchez at 1b this week but can't seem to pull the trigger. Lance Berkman is a thorn in my side. He's hitting .292 over his last 14 games, but .190 something over his last 7. What to do?

Well, one thing I've worried very little about since April left town is the pitching staff. Jeff Niemann is living up to the hype I created for him this spring, Verlander and Peavy have gone back to being dominant, and Ian Kennedy looks like a young stud in AZ. Carlos Marmol has 44Ks out of the bullpen to go with a few saves, and we're starting to build some depth at SP with Sheets and newly acquired Derek Holland. We had to lay out a decent chunk of cash for Holland, but I'm hoping it's worth it. We've also added Kris Medlen. I like his arm, and so does Bobby Cox. It doesn't hurt that both Medlen and Holland are RP eligible if we decide to roll 7 SPs out there for a couple weeks to try to catch up in Ks and Wins.

That's all for this week, my goal is to get that box of 1998 Donruss Updates scanned this week so I can tell the tale of the Search for the Crusade Cards.
Posted by Sharpe at 8:05 AM