Anyone any closer to cracking this thing? 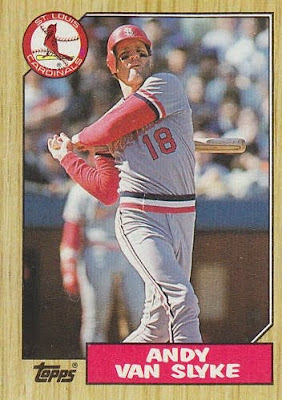 I don't think I recall much of Andy Van Slyke as a Cardinal. My memories of him start with the Pirates. I've also got a wood Van Slyke Louisville slugger bat that I still like to use on occassion.

I received a couple of trade packages this weekend, and I'll try to get those posted over the next couple of nights. As usual, people were generous. I opened a bubble mailer full of 1986 Sportflics on Saturday and was greeted immediately by Paul Molitor. No better way to start a Saturday afternoon.

In baseball related news, I see that Mark Rogers is scheduled to make a start for the Brewers in the coming weeks. Rogers was drafted 5th overall in the 2004 draft but his career has been hampered by injuries up until this point.
Posted by Sharpe at 8:43 AM

Email ThisBlogThis!Share to TwitterShare to FacebookShare to Pinterest
Labels: ?