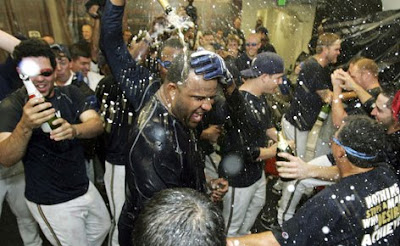 It doesn't seem like that long ago that the Brewers were riding workhorse CC Sabathia's arm into the October lime-light . . . . ahhhhh the memories.

I really do get excited for playoff baseball. Although I wonder why the first round is played during the day, but I digress.

Lucky me, I've got tickets to Game 1 and Game 5 (if necessary) at Target Field to see the loser of the Yanks/Rays divisional battle take on the Twins in the first round. I couldn't be more excited.

I've never seen playoff baseball (remember, grew up near Milwaukee, with the Brewers, enough said). For Game 1 we'll be sitting in the RF bleachers near the open plaza area where Thome likes to swat those moon shots. So excited. The Twins really are my adopted team, and even though I grew up a Brewers fan I've gotten extremely close with this team as well.

The Twins pitching seems to be sputtering a bit here down the stretch, but hopefully these silly 5 game series help out a bit with that. I've never been a huge fan of Carl Pavano, but he pitched decent most of the year. Hopefully he and Liriano can pitch a couple of gems next week and allow me to also see my first ALCS. Tickets are in hand for that, should it happen.

And finally, a little nod to my fantasy baseball team, making a run for the title in the final week. Currently in first place, trying to power through the loss of Longo, only 5 days remain before I find out if I bring home title number four in 11 years. I've got midweek starts coming from Derek Lowe (he's been on fire of late), Ian Kennedy, and Justin Verlander. I'm praying for good outings.

I still owe a couple people trade posts, and I'll get to those this week. Promise!
Posted by Sharpe at 8:30 AM