It's a beautiful Friday afternoon here in sunny, sunny Minnesota and I was inspired to take an extra long lunch to go out and grab a pack of cards.

Inspiration came directly from the Cardboard Junkie post I read sometime this morning about his favorite Topps Heritage pack from this year.

So let's preface this with I've never bought a pack of Topps Heritage in my life, but was intrigued by the old school design and the possibility to try out some new school baseball card gum. I see they protect the cards from the gum nowadays. Pfffffffffffft, I'll take the stains, that's character right there!

My first card was that of Kevin Youkilis #111

I also pulled #185 Kyle Kendrick, and apparently he's not a NASCAR driver like I pictured in my head. And there's no mention of it on the back of his card so its got to be true, right?

Then I started to pull cards directly related to my fantasy baseball team which made me happy. #32 Johnny Cueto (GV 55er) and Jay Bruce

After that I was rewarded with a Ryan Howard (GV 55er) and Ernie Banks then and now card. Surprisingly enough, the HR leader totals were very simliar for both 1960 and 2008. 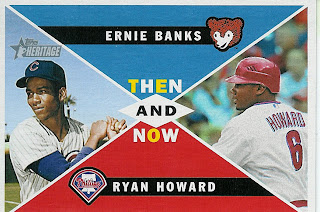 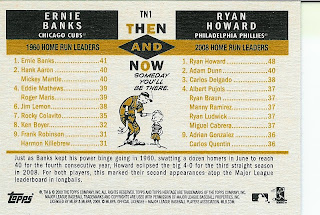 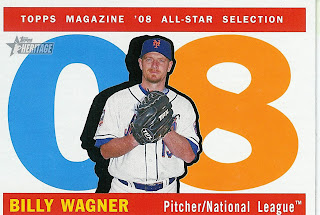 To continue the trend of big market players, I got a Knuckle & Fork card featuring Tim Wakefield and Jonathon Papelbon. Remember back when Papelbon was going to be a starter and not waste all his talent in one inning which sometimes may or may not feature anyone all that difficult to pitch to? Me too, I miss that. 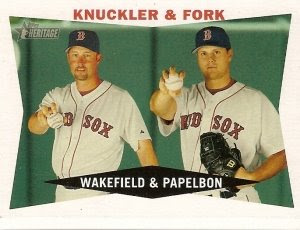 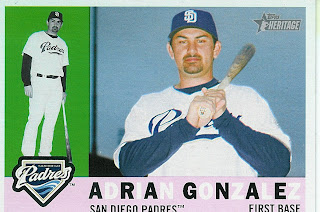 #98 Shawn Marcum rounds out the pack

All in all I'm satisfied with what I saw, again, it would have been cool to see a Brewer or Twins card, but that might have caused me to go back for more right away and I'm still working on finishing up that Goudey base set as well as the Topps Series 1.
Posted by Sharpe at 12:28 PM