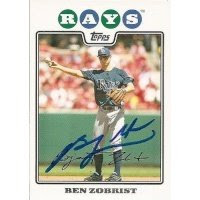 The only way to describe this fantasy baseball season is "painful".

I don't recall a season in which so many teams were suffering through injuries to their top players.

For my squad, the Golden Valley 55ers we were dealing with Beltran being in and out of our lineup all week and it looks like whatever virus he caught is going to keep him out of Week 9, so we're sitting him again.

This also means our roster is now filled with mostly "of the moment" guys like Marco Scutaro, Russell Branyan, and Ben Zobrist. I'm very excited about the Zobrist acquisition. This kid can hit and he'll stay eligible at 2b throughout this year and next.

Since I'm getting on the Zobrist bandwagon, I'd like to find someone with an auto or relic card of his to trade for . . . just a thought . . .

I decided to stop riding Kurt Suzuki's hot streak and jumped over to John Baker of the Marlins at catcher. Ryan Howard has finally started to heat up at first base. Troy Tulowitzki has not heated up at SS. I'm tempted to play Zobrist there and look at some other combination of outfielders.

Speaking of outfielders, I'm trying to find the hot hands each week. After dumping Delmon Young this past week, we're now carrying Corey Hart, Carlos Beltran, Vlad Guerrero, Jayson Werth, Ben Zobrist, and BJ Upton. Upton is still not batting over .200 and I've resigned myself to benching him, that is, if Beltran wasn't sick.

Ideally, I'd run out Beltran, Guerrero, and Upton if all were playing well, but this week it looks like Upton, Zobrist, and Werth. Zobrist is red hot and Werth is heating back up. Vlad hasn't gotten going yet, but should soon.

So as I was saying, I could throw Zobrist at SS, sit Tulo and put Upton, Werth, and Vlad in the outfield, or take my chances with Beltran coming back early in the week.

Over to the pitching side of things, I'm done with Liriano. I'm not going to deal him after seeing what he did last year after the same sort of start, but wow, he's destroyed my ERA and WHIP this year. In a roto league, that hurts, a lot. So for now we only have 3 serviceable starting pitchers: Chris Volstad, Johnny Ceuto, and Justin Verlander each with one start this week. That means we're running out 4 relievers, but we can't afford to do that very long. We're at the top of the K leaderboard but middle of the pack in Wins and Saves, and near the bottom in ERA and WHIP. Scott Downs, Joel Zumaya, Francisco Cordero and Heath Bell round out our staff.

My last note for this week . . . I can't believe I just played Chris Davis through a 3 for 40 stretch. Please Chris, find that sweet stroke again, we need it. And when you do, please share the secret with Upton, Berkman, and Tulo. K Thx.
Posted by Sharpe at 8:18 AM