Well, as I was saying, when I went out in search of my second Goudey blaster I noticed that pretty much every Target store in my area was out, so when I found one (actually 2) I bought both.

I figured I could get pretty close to the entire base set with three blasters and make trades to finish off the rest. More on that to come once a certain package arrives later in the week.

Anyway, as many of you out there may have noticed, Target has restocked with Goudey blaster boxes, something like 4-6 at each store, so if you were looking for one, they are out there again in force, or at least were as of this weekend.

Back to my story, the third box, the last of my 24 packs. It was a nice summer afternoon and a friend and I had just finished running 10K. Our reward for hitting our goal time was to break open the last four packs. As we started into the first pack, he reminded me that I was "ahead" due to the fact that I pulled a Bill Hall Memorabilia card. I reminded him no one really wins when his wife is sitting there making fun of us for opening baseball cards like two middle school kids.

Nevertheless, all I really wanted out of this last box was a black parallel. Low and behold, three packs into the final four, I found this: 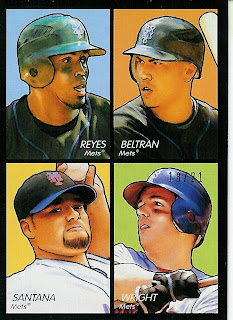 Pictured are Jose Reyes, Johan Santana, David Wright and Carlos Beltran some in the black jerseys, and stamped 18/21. I was very excited and consider each and every blaster a success, but I'll consider my summer of Goudey complete save for trades with anyone out there that's looking to deal.

I'd consider dealing the Mets card pictured above for a Brewers black parallel 4-in-1 if that exists - I haven't gone through the complete checklist as of yet.

My friend was not shutout in his three boxes as he managed to pull a Josh Willingham memorabilia card, although the other night he'd already convinced himself it was Ryan Zimmerman and I have to bring him back to the reality that it was Willingham. I'm sure he'd also deal that card for something of the same variety but featuring a Twin or Brewer.
Posted by Sharpe at 9:18 PM