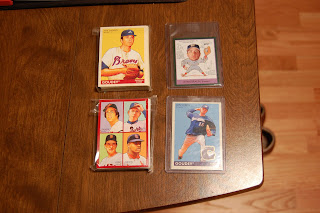 It was well worth the week long wait to have a very special package show up on my doorstep this afternoon.

A while back when I first posted the list of cards I needed to complete the 2009 Goudey base set, a nice guy named Ryan over at Card Cache informed me he had a good majority of the cards I needed available in trade. Eager to make my first trade I replied to the message he left in my comments here.

Ryan did one better than trade with me, and sent me all the 2009 Goudey cards I needed for my set with a couple of special surprises.

The first, pictured in the lower right is a Ben Sheets Goudey Memorabilia card. The second pictured in the upper right is a green mini Heads Up Ryan Braun card. Also included amongst the cards I needed for my set were other Brewers cards from the base set along with about 14 4-in-1 cards, including 3 blue and a green.

Easily my favorite, which you can see in the lower left of the picture, was a card featuring Jim Palmer, Bob Gibson, Gaylord Perry and Nolan Ryan. Little did Ryan know I spent a good portion of the 80s and early 90s collecting Jim Palmer cards, and when I save my collection from the depths of my parents basement sometime this summer, I'll take a look and see where I left off.

I intend to pay this favor forward by not only keeping my eyes peeled for some of Ryan's favorite players which I hope to learn about through his writing at Card Cache, but also by sending an Albert Pujols mini over to Marie at A Cardboard Problem as soon as I can.

Ryan, you'll be happy to know I also passed along about 30 cards from my pile of extras to my friend Brian who is sharing in my obsession with me this summer. We had a draft for the 4-in-1s tonight and it was fantastic and I can't thank you enough.
Posted by Sharpe at 10:22 PM