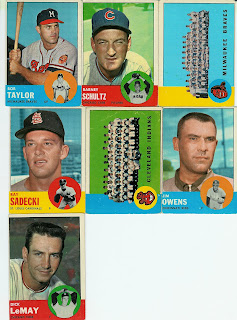 On the way into the thrift store today, with my wife, I lamented how I left my phone at home and wouldn't have any other way to kill some time while she went through everything. Normally, I can find a way to entertain myself for about 10 mins, but then I quickly get bored of rummaging through stuff.

Not today, no sir. I found a box/bin full of random baseball cards that had been bundled up into some random plastic bags and stapled shut. As far as I could tell there was no rhyme or reason as to which cards went into each bag, or how many. This bag might have 15 cards and go for 69 cents. This one over here, thirty-ish cards, same price. Every once in a while I'd come across a Twins card on the front of the bag, this meant a nice little mark up for the thrift store. $1.69!

These bags were mostly filled with junk wax and I was mostly just organizing the cards bags by brand and year. I quickly started to realize that someone had dumped most/all of the 1986 Topps set there and that comprised the large majority of the cards. As far as I could tell, these 86 Topps were mostly packaged together. There were also some assorted Fleer, Donruss, Upper Deck, Score, Bowman, etc, etc. You get the picture.

As I was sorting through the cards, I saw 1990 Bowman Denny Martinez staring at me. 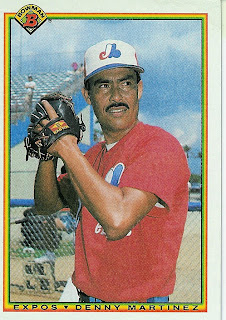 Nothing special, but I flipped the pack over and noticed a 1963 card of Bill Monbouquette. He aparently threw a no-hitter in 1962 against the Chicago White Sox. As far as I can tell, that doesn't look like much of an accomplishment. The only hitter I can identify is one of the worst HoF selections of all time, Luis Aparicio. No, really, if you were asked to go back through the HoF and take out anyone you don't think should really be in, his placque would be in the first wheelbarrow you towed out of that place. 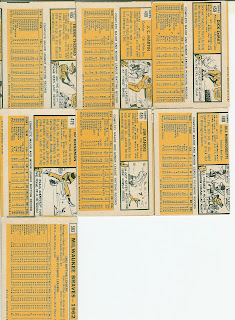 Turns out there were 7 cards from the 1963 set included in my little baggie of cards. All were misprinted with the incorrect players stats on the back. There were two team cards, as you can see.

Correct me if I'm wrong, but Ed Brinkman #479 who appears on the back of the Ray Sedecki card, sounds like the name of an umpire that's around these days. Right?

Another note, the quality control in this set must have been dubious at best since you've got Barney Schultz position listed as "Pitcher" and everyone else (who's a pitcher) listed as "P".

Anywho, I have no idea if these cards have value and that's really not the point, the point was to pick up some interesting cards. Mission accomplished.

PS - Whoever wrote about 1993 Upper Deck on their blog recently, you're totally right, that 1993 design is great. I was blessed with a very nice Dickie Thon Brewers card from that set. I love that he sports the "IF" position. "IF" just about sums up everything about Thon's career. That is all. Enjoy your Sunday. 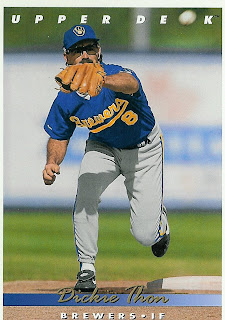 Email ThisBlogThis!Share to TwitterShare to FacebookShare to Pinterest
Labels: 1963 Topps