Wow, I totally went off the radar last week. But I'm back, with a much overdue Mail Bag type post. I'm very much behind on posting what's come in the mail. Specifically, I owe Beardy an entire post about the A&G minis I received in trade from him a few weeks back (I know, I know, I'm a horrible person).

I also recieved a Bill Hall jersey swatch from a nice guy named Brian. I don't think he's got a blog out there, but if I'm wrong, Brian please correct me and I'll link you up. The Bill Hall package came on the day the Brewers designated him for assignment, and I'll likely remember that for a long time. I actually used the Hall card in trade for two Goudey cards I needed for the 2009 base set with my friend Brian. I'll have to post about that as well. I guess my to-do list is growing ever longer.

This post, however, is to document what my good friend Mike, over at JD's Wild Cardz sent over last week. These were in trade for a handful of 2009 Topps Heritage cards he needed for his Heritage Project (can you help?)

First is a mini from the 2007 Goudey set. This was a surprise in the package, and I was very happy to see Mr. Verlander, who is one of my favorite players and the ace of my fantasy team. 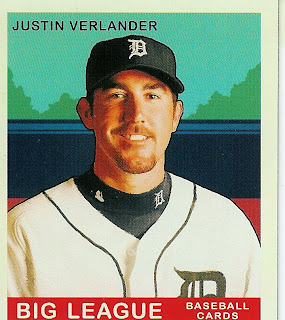 He also included a mini of Glen Perkins rookie card from that set. There was also a Matt Kemp 2009 Goudey mini included.

The next "card" is a fantastic addition to my collection. My very own Ginter Code advertisement complete with Mike's autograph. I'll just need Nick to autograph it for me as well when I send out his trade packaged this week. What's terrific about this is that I sent over the Ginter Ad cards to protect the other cards in hopes that Mike would take that as a sign . . . to sign. And he did. Thanks Mike - great signature too. 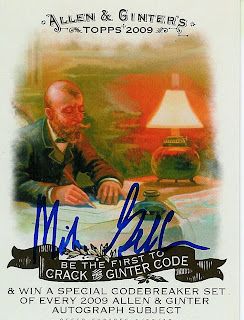 He also sent over a Joe Nathan 2009 Goudey base card for my friend Brian along with the Vlad base card and Brooks Robinson short print I needed. It looks like Operation Fig Tree is starting to bear fruit. Yup, I'll end it on that terrible pun. 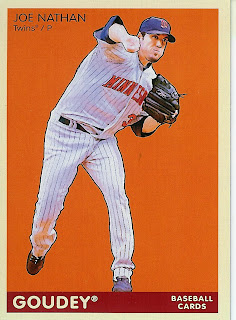