I Dipped Into Ebay, Not Sure How I Feel 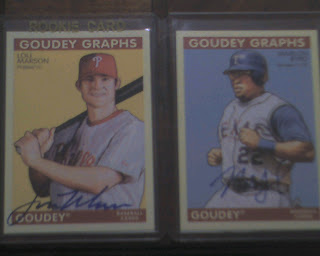 Okay, so here's the deal. I've added two Goudey Graphs from this year's set to my collection.

But I had to go to eBay to do it. I really didn't want to, but I also really wanted to add these cards to my collection.

So . . . the backstory. If you've read any of my posts over the summer and into the fall, you'll know that I did a good bit of training for some 10K races this summer with Brian. He and I were breaking packs and blasters of Goudey for reward for finishing various achievements throughout the season. After we were three blasters into our Goudey season, Brian started to lament how we should have just laid of some cash for a hobby box, thus garaunteeing ourselves a Goudey Graph and some memorabilia cards. My reaction to this was:

"Brian, do you really want to lay out $80 to land a Marlon Byrd autograph?"

Thus the Marlon Byrd phenomenon was born. Anytime we talked about getting a bad hit from a box, we'd always say "you're just going to pull a Marlon Byrd anyway". Even when he broke a box of Philadelphia Football Brian dubbed his Quentin Jammer auto a Marlon Byrd.

I knew at this point I'd have to grab the Goudey Graph of Marlon at some point since it was such a key part our conversations around collecting this summer. This card is priceless to me.

Next up is the backstory on Lou Marson, who has since been dealt to the Indians (I believe in the Cliff Lee deal). As we were breaking these blasters of Goudey this summer, the doubles and triples started to pile up. For whatever reason Brian started to end up with a whole stack of Lou Marson cards, and I had approximately six Greg Golson's. In all honesty, stories like these are why I collect cards. All summer we joked about trying to get a TTM autograph from each of these players for one another. As of now, neither of us has taken the time to do it, so I figured I'd do the next best thing and pick up a Lou Marson Goudey Graph for my partner in crime.

In case you are wondering, I picked up each of these for $2 in a "Best Offer" auction. There was also the one that got away, a Prince Fielder Goudey Graph. Prince went for $16.50 which was just over what I was willing to pay. If there is someone else out there with a 2009 Prince Goudey Graph, I'd be interested in that. Or a Greg Golson Goudey Graph. I think they made one of those as well.
Posted by Sharpe at 10:06 AM