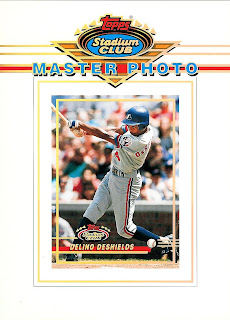 Blogger decided to be a pain in my butt last night and not let me upload photos. As promised, number two in my series of six 1993 Stadium Club Master Photos that I purchased from an estate sale this weekend.

I've actually got quite the soft spot for Delino DeShields. He was a staple of my early 90s fantasy teams. I loved his speed and bat at second base. Paired up with Marquis Grissom in Montreal it was fun to watch that team run.

Delino went on to have a nice little 13 year career with his best season coming in 1997 with the Cardinals.

And since a couple of you emailed asking me . . . yes I'll consider trading these if you come across something you like. Of the six, there's probably going to be one that I'm going to have to keep.
Posted by Sharpe at 6:09 PM