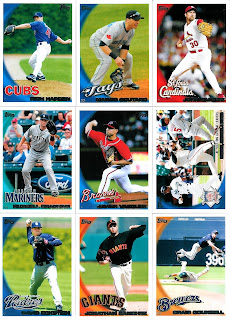 It was finally time for me to break down and purchase a pack of 2010 cards. I'd been doing my best to stick to finishing off the 2009 Topps Series 2, U&H, 2009 Goudey SPs, and continue my work toward finishing the 1992 Stadium Club set, but I broke down and needed to feel like I was part of the club again.

I was happy to get a Brewer even if it was Craig Counsell. Anyone else notice what I did about this pack? A theme of sorts . . . ?

And for those of you who like the inserts, I'll show those off as well.

I'm not sure I care much for the shots of Major Leaugers in Little League. Doesn't do anything for me. I feel like there's been enough "History of the Game" type of stuff in recent years and it's time to move on. Counting Topps Town as cards is just sick and wrong.
Posted by Sharpe at 9:03 AM

Email ThisBlogThis!Share to TwitterShare to FacebookShare to Pinterest
Labels: 2010 Topps