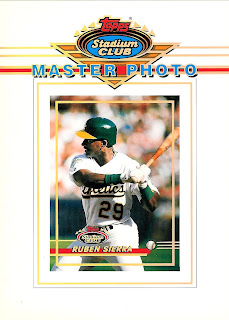 Another Oaktown masher. Mr. Ruben Sierra to you. I had the utmost respect for Ruben as a player. I felt like he was a solid athlete with good to great power. Injuries started to derail him right as he hit his prime and he also was plagued with a normal person's player arc. Oh what roids could have done for Ruben.

He was 2nd in the MVP balloting in 1989 and was only 23 years old. This kid had a bright future. He still managed to play for 20 years and smacked over 300 HRs. He played with a ton of teams, but I'll probably most remember him as a Ranger or Yankee.
Posted by Sharpe at 7:45 AM