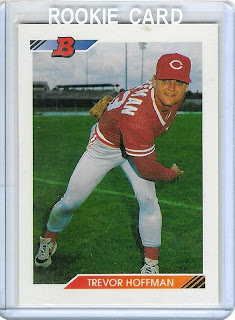 I've said it once, and I'll say it again. I was dead wrong about Trevor Hoffman last year. I said he was washed up and there was nothing left in the tank. I said he couldn't get by with location and a nothing fastball. I was wrong.

However, something great came from being wrong. I learned why Hoff still had it. This dude is a machine. Here, check out some of thedetails.

So once I found out that Hoffman was a workout fiend and liked to continuously run laps around Petco/Miller Park before games, he became an inspiration to me and my running partner Brian. All last summer we'd talk about making Hoff proud by knocking out mile after mile, night after night. Of course we are resigned to MLB The Show for picking up our saves, but we've got the running part down.

As the summer wore on and we both got more and more into the baseball card scene, Brian noticed that our local card shop had a Hoffman Rookie Card. He gladly picked it up and now we're using it as a traveling trophy.

The last race we ran last season was the Baldwin Area Medical Center Booster Shot 10K. While there were only 4 men in my age group, I did manage to place 3rd while Brian placed fourth thus Hoffman is mine until April 17th when I'll be defending my title over 12.5K. Wish me luck, I'd like to keep the Hoffman card all summer! 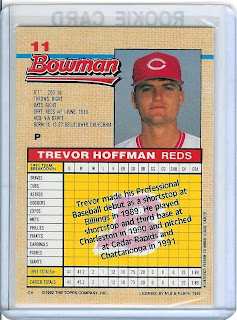