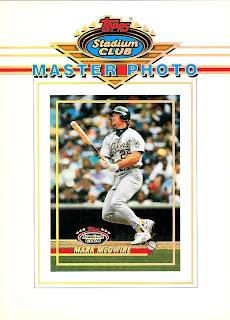 Since Blogger decided to not let me post with pictures last night, I'm going to make up for lost time and post the 3rd of 6 cards I came across this weekend.

None other than the embattled Bash Brother himself, Mark McGwire. I won't say I feel bad for Mark, because I don't. And I won't say he belongs in the Hall of Fame, because he doesn't. Did you know that BJ Surhoff has more hits than Mark McGwire? Other than the lofty HR numbers, he wasn't anything special. Although I do believe he knew/knows how to hit. I see a lot of current players crediting him with helping them.

Most recently it's been Bobby Crosby. Another guy that broke my fantasy baseball heart.
Posted by Sharpe at 11:25 AM