Yesterday I wrote a post asking which card designs you like best or preferences you have for how a card looks and is laid out. I won't lie, I'd love to get more feedback. What works? What doesn't? What do you love, and what do you hate?

Today I'm going to continue a little bit more on the theme of card design. I spent the better part of this afternoon going through 4 huge plastic tubs filled with baseball and football cards from my youth (late 80s and early 90s). I bet a saw over 100 different card designs as I opened cardboard monster box after monster box.

Very quickly I realized the best sets I saw today were the early Topps Stadium Club sets, and the early Upper Deck sets. Both the football and baseball sets are equally top notch for both products. I can't stress this enough. Glossy is good.

On the flip side, ToppsGold, whatever the heck that attempt was, is terrible. Foil is terrible. You got that? FOIL IS BAD. You can't read it and it doesn't present well. I kind of wished I'd scanned a ToppsGold card. Wait, this is the internet, let me go grab one. This scan is courtesy of 25 Years of Baseball. Steve writes a good blog so check it out. 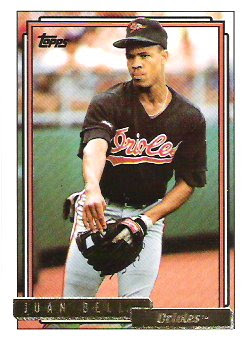 Again, people, foil is a horrible thing. I stand by that. I'm not a designer, and I'm not very artistic, but those two things I'll stand by.

Even if the design element didn't change much from year to year, the pictures are great on these cards even 17-19 years later. It's no secret this set was designed to compete against the new Upper Deck cards which were high gloss with color photos on the back.

As I said, I saw a lot of different card designs today, and many were and still are terrible. I wish I could properly capture with words the visual vomit that was being put out by the one thousand or so people making football cards in the early 90s. That's probably another story for another day on another blog though.
Posted by Sharpe at 7:08 PM