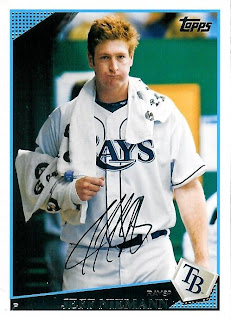 Jeff Niemann. I love you, but I'm scared to know if you love me back. That's why I couldn't possibly have started you this week in fantasy baseball.

You see Jeff, it's been a long time since I had feelings like this about a young pitcher - and well, I don't want to be hurt again.

Many have hurt me Jeff, too many to recount. But I'll try. Just last year there was Johnny Cueto, Jon Sanchez, and Chris Volstad to name a few. Oh, before that there was Phil Hughes, and his AL East cohort Clay Buchholz. Go back further and you'll find Joel Zumaya. I'm telling you, this list could go on forever.

That's it Jeff, while I totally dig this dorky photo on your 2009 Topps card, along with the sweet autograph you supplied my friend Brian while he swung by Spring Training last month, I simply didn't have it in me to see if you would love me back this week against Boston and the Toronto Wells. Yes, at this point, Vernon Wells has become bigger than the team itself, hence I move for them to rename the franchise.

Now if you somehow find it in you to destroy the Wells, and the Rays have won 12 straight, I'll have no choice but to see how you fair next week. But all I ask is that you don't hurt me Jeff. It would set me back a decade.

For the record, I went with Dave Bush against the Pirates (tonight) and Cubs if you'd like to see how I fare.

This begins three days of Rays autos that I'd like to post. I have a mini-obsession with that franchise, especially their pitching.
Posted by Sharpe at 12:57 PM