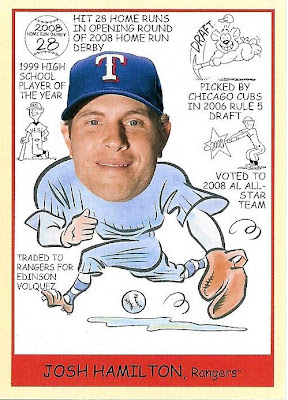 I figured I'd kill two birds with one post. Above is the third of four Goudeys I picked up in an ebay lot a couple weeks back. I've been slow to post and wanted to get it out there. I believe if they'd have made an entire set of these cards I'd have collected that as well. I like the cartoon details on the front, it just appeals to me.

Over to the HBL. My team has made great strides in the past two weeks. The pitching has really picked up with Peavy, Verlander, Beuhrle, Kenndedy, and Jeff Niemann. I can't say enough good things about Jeff Niemann this year. He's really starting to make his move toward the top tier of pitchers. He always had a really nice K rate in the minors and I've been comparing his career path with Ben Sheets (hopefully not the injuries). It took Sheets three full seasons before he finally brought the WHIP down and K-rate way up.

As good as the pitching has been the hitting has been equally terrible. Then came the injuries . . . to Benji Molina and Troy Tulowitzki. Molina, fine, I'll put AJ Pierzynski back in. Tulo? Well Tulo I was counting on busting out of his yearly slow start pretty soon, but he's hurt again. Am I surprised? Nope. Did I plan for this? Yup. Derek Jeter, you're a lucky man. You were going to grab some pine this week due to your all around crappy play, but you get a reprieve in the form of a Tulo quad injury.

I've been unhappy with Jeter all year due to his non-base-stealing. At this point I'd rather be playing Rickie Weeks at DH. More RBI, more runs, and more SBs, but then again, Rickie is due to be hurt in a week or so.

Lance Berkman is the other hitting I'm putting on notice. We will not abide another crappy week from you Lance. One more week Lance, that's it. We're sitting in the top half of the standings and I won't let you ruin things.

Lastly, Jay Bruce, I love you, but it's time to sit. I've got Marlon Byrd burning a hole in my pocket as well as most of the NL pitchers. So that's it, Jay Bruce sits till he hits (above .270).
Posted by Sharpe at 7:44 AM