Trade With Kelly At Baseball Obsession-itis 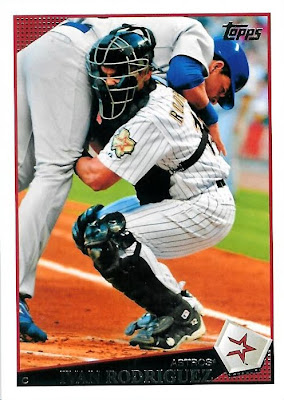 One of those mutually beneficial trades. Kelly had some of the 2009 U&H lying around that I needed, and I had a little of the same, along with some 2009 A&G to knock of her lists.

There's still more damage to be done on those lists, so if you have a minute, swing by and check those out. It's all nicely Google doc'd so you can come back to it later.

I pictured my favorite card from the trade. Looks like something that should be over at Play at the Plate!

On an unrelated tangent - hmm I think that's redundant, ah well - I did another 2010 A&G Blaster Pack Break to try and prove or disprove JD's Wild Theory. More on that in the AM. Now for some night time baseball action, oh wait, it's all on TBS so I can't see it. Shame!
Posted by Sharpe at 8:07 PM