Justin, You Complete Me 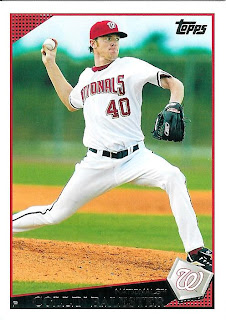 Maybe more specifically, you've completed my 2009 Topps Series 1 set by sending over Colin Balester.  And for that, I couldn't be more appreciative.

If you guys haven't seen Justin's site, or his want list please swing by and see if you can help him out.  He's looking for post-2000 Cubs cards as well.

So where have I been for a month?  Well, that's a great question, and I've got an equally great answer.  Job hunting!  Yes, Mr. Economy through me a curveball and decided to set me down swinging.  As you can imagine, cards were the first thing cut from the budget.  Okay, maybe not the first, but they were UP THERE!

Meanwhile I've been following the Brewers progress this offseason.  Very pumped to have added Shaun Marcum to the rotation. Now if we could just find a way to bring Greinke into the fold we'd be set.  Maybe a three-way where we move Prince?  Or perhaps a trade out west with the Angels who are looking for a bat.  I'm just hoping Doug Melvin doesn't settle for Carl Pavano - I'm not a fan.  Just don't like him.

I received some other trade packages in the past month or so and I'll get some things posted again now.

I still owe Justin some cards in trade, and I'll be getting something out his way this weekend, and I know there are a couple other people who are waiting for a post about a completed trade with me  as well. I haven't forgotten, don't worry!

Oh, and if you're into that sort of thing, I'm also working on the next SS92 code.  To debut sometime around New Year's.  And yes, Mr. Gellner, I know I still owe you a back-up prize from solving the first one.
Posted by Sharpe at 10:13 AM