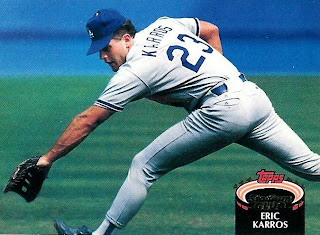 This is exactly how much catch-up I'm trying to play, this trade for cards to be named later came in from Steve over at White Sox Cards in mid-February. I haven't forgotten Steve, I swear.

I originally promised to send him some Sox 2009 Topps T206 cards that I had from his want list, but I see they've mostly disappeared except for AJ Pierzynski and Jake Peavy. Now, I know I have Jake Peavy, but I do have a love affair with the man. See, it's right here. 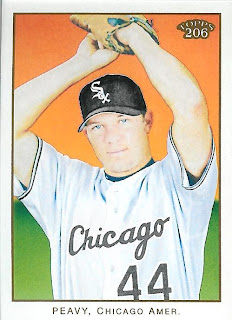 So it's either part with Peavy or scour his want list for something new. I'm sure I'll make a decision quickly this week to close the book on this trade.

Steve did send over 16 cards I needed from my 1992 Topps Stadium Club want list. This side project started sometime over the winter when I realized I had about half the cards from Series 1. I really liked the idea of the rookie card image in color on the back of the cards. In fact, I can actually remember buying these packs when I was 15 or so and really liking the glossy photo paper. Very high end for its day. Here's a shot of some of the cards he sent over. 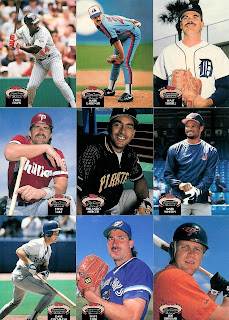 These cards bring back great memories. My friends and I used to heckle Chili Davis and Tim Wallach (not pictured here) unmercifully at Third World County Stadium when they came to town to take on the Brewers. I'd go so far as to say with the light crowds at the start of the 1995 season (remember they were going to use scabs to start the year but pushed the dates back instead once they reached an agreement?) that Tim Wallach could hear every word we shouted at him. Chili Davis too. You could basically sit anywhere you wanted in that park it was so empty. Don't get me wrong, it was empty to begin with but even the ushers didn't make you leave the "nice" seats in the beginning of that 1995 season.

Here are a few more including one of my favorites to watch in that era, Jay Buhner.

I'll do my best to update my list of Series 1 needs from the 1992 Stadium Club set. Also if you have anything to trade from Series 2, I don't think I have any. Although I did find a real cheap set of Series 3 back in December. But that's another post for another day - or just later tonight.
Posted by Sharpe at 3:04 PM