My favorite part about the Gint-A-Cuffs contest is the rules surrounding random cards of certain "players". For example:

"-1 points for pulling the base for Suez Canal, Milky Way, Old Faithful, Electron (because what the heck are you going to do with that)"

Or in this case: 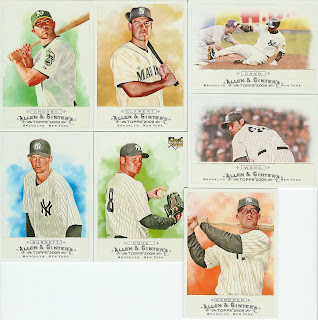 Every time I opened a pack I prayed not to stumble across a Yankee or one of these turds. Although I tried with all my might, I couldn't avoid Bobby Crosby or Jeff Clement. As an extra bonus, I was somehow lucky enough to pull all the worst Yankee cards in the set. Really, I did. Burnett? Wang? Phil Coke? I feel like Phil Coke + Yankee Stadium would = the biggest marketing gimmick in the world if he was somehow able to have a great career.

I will cut Cano some slack, he's not terrible, but based on a side bet I had in my fantasy baseball league between who would have the better career: Rickie Weeks or Robinson Cano, I have a side vendetta with Cano. Brett Gardner seems likable enough. The guy looks like a chip off the Roger Maris block. Before I saw his name on the card I thought I'd landed some old school Yankee from the 60s.

But I digress. The best part about my Yankees and turds is that they only net me -1 because Burnett turned out to be a short print. He's number 300-something. I'll pretend Bobby Crosby was the only guy to hit me with a -1, because I hate him a whole lot.

Hammy could be worth anywhere from 10 to 50 points I guess. I feel that the Box Toppers should count as hits since you may only get one per box. Relics qualify for the multiplier bonus and you should get somewhere between 2-4 per box.

For now, I'll consider the Hamilton +25 since he's an N43 Box Topper and x5 for a Favorite Player hit. My running total is at +26 after Yankees and turds.
Posted by Sharpe at 7:49 AM

Email ThisBlogThis!Share to TwitterShare to FacebookShare to Pinterest
Labels: 2009 Gint-A-Cuffs