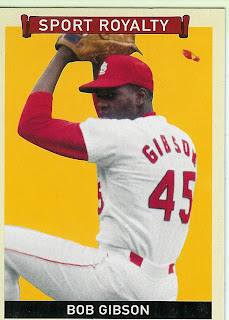 Truely a member of baseball Royalty, Bob Gibson did me the honor of appearing the in pack I grabbed from Target this weekend.

For the record, I'm picking from the scraps of Goudey packs left at my neighborhood Target. I want to say there were six packs left when I decided to dip into the leftovers, and I've now bought three of them.

I've netted a Curt Schilling card I needed for my set, a Ted Williams short printed base card, a Vlad Guerrero Heads Up, and now the Bob Gibson card. Suffice to say, I might be done pushing my luck on those leftover packs.

Welcome to my collection Bob.

I'll be sure to append the list of Sports Royalty cards I've found thus far, so as to possibly facilitate trades down the road.
Posted by Sharpe at 12:38 PM