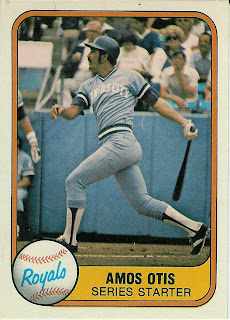 This is likely to be just another post in a long line of "look what I found" posts, but I have a serious question for any of you early 80s collectors.

What the heck does "Series Starter" mean on this Amos Otis card? I found this card amongst many 1000s of cards I have tucked away in those 3,500ct cardboard boxes from my youth. Based on the condition of the 20 or so 1981 Fleer cards I have, I can assume I bought some random packs in my teen years of what I considered "cool old wax".

What I mean by this is the Otis card is in pristine condition, so I know immediately this card is suspect. Why, you might ask? Because this guy carried his early baseball card collection, dating back to no earlier than 1982 Topps, in a suitcase. 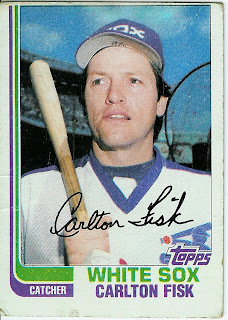 To this day, regardless of actually scarcity, I view any cards from 1982 to 1986 as scarce. Anything prior to 1981 I consider myself lucky to have.

Back to the Fisk card. This was 1 of only 3 1982 Topps cards I found within the 3 large boxes I sorted through this weekend. I know I have a pile of really beat up 1982 Topps, and I'm looking forward to finding them all.

I remember this Fisk card from my childhood and it's in remarkable good condition for my collection in this era. My 82-86 cards routinely have rounded corners to the point of fraying, creases, or have otherwise been damaged somehow. This Fisk card, documenting his first season as a member of the pale hosers, sticks out in my memory. I'm not sure if it's the dopey look on his face, the bizarre green and purple colors, or the off-center cut, but I remember it well.

Here are the two other '82 Topps I found:

Atlanta Braves Future Stars. Two of the three didn't have bad careers either. Brett Butler racked up 2,375 hits and stole 558 bases in his 17 year career. He's probably most remembered for his years with the Giants and Dodgers during the late 80s and early 90s. He also made one All-Star team with the Dodgers in '91.

Larry Owen was already 27 when this card was produced and hadn't really shown much promise even in the minors up to this point, so I'm not sure why he was included. But if I had to guess, based on what happened to the Braves throughout the 80s, I'd say the cupboard was probably pretty bare. Larry toiled away in AAA for 7 more years getting a few cups of coffee with the Braves and Royals. 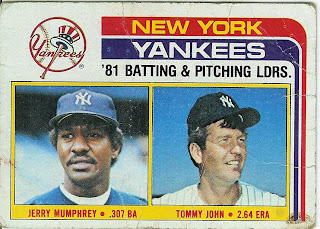 This last card is of the 1981 Yankees Pitching and Hitting leaders. I wonder what two stats they'd choose today to represent the best hitter and pitching from each team? They've picked AVG for Mumphrey and ERA for Tommy John during the strike shortened 1981 campaign.

I've scanned the back to show the team checklist for the 1981 American League champs. 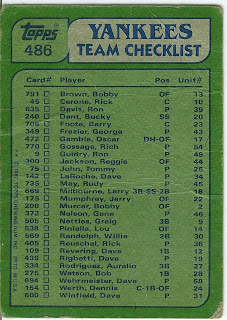