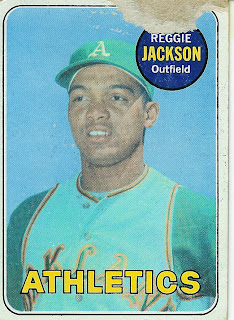 I finally rescued some of my childhood player collections from my parent's basement.

I'll likely spend some time this week documenting what I brought back. This includes my Jim Palmer collection which isn't nearly as big as I thought it was, but still contains some nice cards I picked up back at card shows in the mid 90s.

What I decided to post today was a card I'd forgotten about. A Reggie Jackson rookie card from the 1969 Topps set. This card is clearly far from perfect condition, but I remember being very excited to find a chance to own it. As you can see, part of the picture side of the card is missing. Luckily it stops just before Reggie's name and doesn't affect any of the picture itself. I have no clue what a card in this condition would be valued at, but I'm very excited to know that I have it.

When I first started collecting cards in 1987, that was Jackson's last Topps card and even then it was cool to pull Mr. October out of your wax.

Now I'm off to finish watching the shootout between the Bucs and Packers *gasp*
Posted by Sharpe at 1:02 PM