What a great weekend. Fantastic weather, got to stay outside, Packers beat Dallas, made some nice trades, and I picked up a single pack to break.

As I wrote earlier in the weekend, I was looking forward to getting some new packs to break open. What I didn't know is that most of the 09 baseball product has been pulled from shelves. I'm chalking that up to inexperience. While there were plenty of Goudey blasters on target shelves just a couple weeks ago, they're all gone now. Same with Heritage, Topps Series 2, etc. Gone, just gone. Some 08 Goudey blasters have shown up for $10 at Target but I'm not really interested.

To top it off, my friend Brian traded me the entire Propaganda subset from the Updates & Higlights series for the Lou Marson Goudey Graph I nabbed on eBay for him. So I'm now out of the U&H pack game as well. I was really only buying those to see if I could hit some of those cards.

This left me in an awkward place on Saturday when we walked into the local hobby shop. There wasn't a single pack of cards I wanted to open, except Sweet Spot and who the heck pays $20 for a pack of cards. So I left empty handed, only to decide on Sunday that I'd celebrate the end of the 2009 pack buying season with one pack of Sweet Spot. 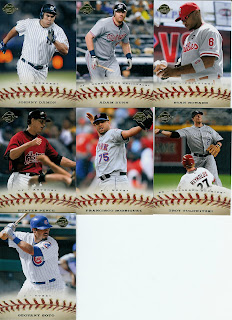 For your $20, you're basically on a treasure hunt for a Sweet Spot auto, but Upper Deck is nice enough to throw out a 100 card base set for you to collect if you so desire. These are the 7 base cards I pulled. Very nice cards I might add. Soto, Dunn, Damon, Pence, K-Rod, Tulo, and Howard. I'm a big fan of Tulo and Howard since they are both cornerstones of my fantasy baseball team so I was happy to have gotten them.

I had never opened a pack of Sweet Spot, so I thought this big chunky thing in the center was possibly just some sort of divider. Imagine my surprise when I pulled this out of the pack last: 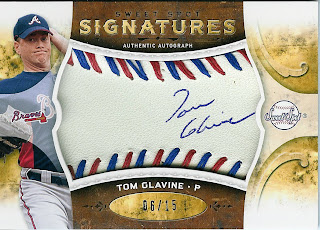 A Tom Glavine, Sweet Spot Auto. Apparently this particular print run was more exclusive. It is numbered 6/15, signed in blue ink and the stitching on the leather is blue red and blue. Honestly, I have no idea what this means, but since it is the first autographed card I've ever pulled from a pack I'd have loved it no matter who it was.

Needless to say, I'm very excited to have pulled a card of a future Hall of Famer with 305 wins. I was actually a big Brave supporter before my Brewers moved to the NL, probably because my dad grew up cheering for the Milwaukee Braves and was somewhat partial to the Atlanta version after they moved.

All in all, like I said, it was a great weekend. I'll feature some of the trades I pulled off this weekend as well, including the Propaganda set later this week.
Posted by Sharpe at 11:04 AM