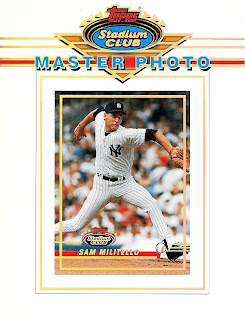 One lousy post per month since the new year? Terrible.

But wait, I've got plenty of excuses. However, they entirely revolve around waiting for a baby to show up. Just a momentary shift in priorities, or at least that's what I keep telling myself.

So anyway, back to the story. I was out this weekend with my wife, running some errands and she saw a sign for an estate sale. She loves going to these things, looking around for random things.

I took a quick tour of the house. The sale had been going on for at least a day and things were picked over pretty well. I ended up in a room with a ton of 1987 and 1991 Twins gear. Sweatshirts, Wheaties boxes - all the standard stuff you'd expect to find just outside of Minneapolis.

I almost didn't notice a small cardboard mailer with what I thought at first were just baseball photos. Turns out they were Master Photos from the 1993 Topps Stadium Club set. I don't want to ruin the surprise, because honestly, this is going to get much cooler than former Yankee Sam Militello.

As a second side note, the scanner didn't do these cards justice. My goal is to rattle off the 6 "cards" I found over the next 6 days.

In the meantime, has anyone else every seen these? From what I can tell, it looks like they were mailed from Topps to the previous owner sometime back in 1993. I'm very curious to hear if anyone else has some of these photos and the story behind them.
Posted by Sharpe at 7:09 AM