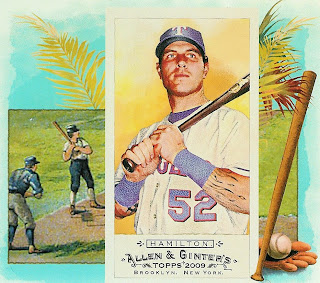 Alright, so there's that little thing I said about being the first to admit if I was wrong about the Ginter Code.

I was totally wrong. Have you seen the movie A Beautiful Mind? It wasn't far from that plot line. All that's left is for me to do to win the Ginter Code Contest is to dig this chip out of my arm and drop off a few letters at this secret hideout over in the industrial park nearby. Yup, it was that crazy. My apologies to the people at Topps that had to read through that submission. I assure you I'm not crazy.

Anyway, I cried for a few days after talking to one of the guys who successfully broke the code. Thanks Nick, for listening to me talk crazy. I must have blown your damn mind when I was pointing to a bunch of the cards that helped you get the actual solution. The overlaps will confuse me forever. But, I'm glad that I got to meet some people I'd otherwise not have met while discussing the code and look forward to next year.

Without further ado, I bring you my entry into the Gint-A-Cuffs contest for 2009 (now officially sponsored by Topps).

I figured I'd start where I started and eventually get to where I got to. How's that? No pack by pack break here, just all the scoring.

Under normal circumstances this lowly old box topper would net a fella +5, but whoa no, not for Josh Hamilton, he of the favorite's player list. I'll take this hit and multiple by 5, per the rules:

That's 25 points. Just as nice as a Group A autographed card. I'll take it.

Off to a good start, running tally stands at 25 points. Stay tuned, more to come.

This post was completely edited for my horrendous math.
Posted by Sharpe at 7:09 PM